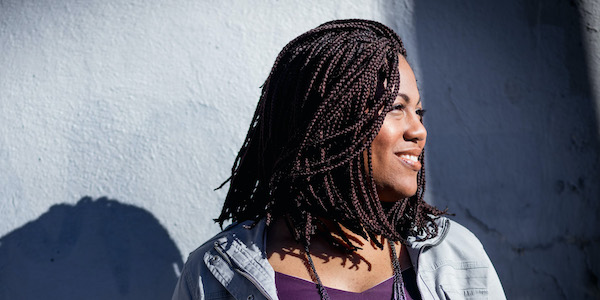 Best-selling author Austin Channing Brown opened her UW–Madison-sponsored talk Wednesday by saying she learned early on that white people have a tendency to think their experiences are universal and normal.

As a Black elementary student in a predominantly white school, Brown remembers a teacher listing the tasks it was important for a child to do daily: brush your teeth, change your clothes, wash your hair.

The last one jumped out at her.

Brown said it was the first of many times she was discounted, erased or not even given a thought by the people crafting classrooms, workplaces or organizations.

“It is past time for all of us to realize that there is nothing inherently better about white culture. Nothing,” she said. “It is simply one option among many. And we would be wise to honor the inherent dignity of all people by not just being present together but by forming a multicultural culture, by creating spaces in which my hair can live its best life.”

Brown, the author of “I’m Still Here: Black Dignity in a World Made for Whiteness,” was the keynote speaker for the final day of the two-day Diversity Forum. It is the signature event of the Division of Diversity, Equity & Educational Achievement.

The forum, now in its 21st year, typically is held at Union South, where participation is capped due to space limitations. This year, due to COVID-19, the free event was held entirely online, opening it up to many more people. Over 5,000 people registered, far exceeding last year’s in-person record of 1,300.

In addition to keynote speakers, the two-day forum featured speeches from community organizers, activists, researchers, and authors as well as workshops and small group discussions related to diversity and inclusion.

Brown’s keynote address was watched live by 2,820 people. She devoted much of her time to talking with and answering questions from UW–Madison students Nalah McWhorter, Tamia Fowlkes and Jared Biddle, as well as moderator LaVar Charleston, associate dean of equity, diversity, and inclusion at the UW–Madison School of Education.

Brown struck several themes, including the importance of racial and social justice groups viewing their passions as interconnected. That way, instead of feeling like they are fighting over a slice of the same pie, they can work together to expand the number of pies. Building coalitions also is a way to avoid burnout — if you need to take a break, others will be there to help with the work, she said.

On the issue of racial justice battle fatigue, Brown said it’s imperative that administrators, faculty and staff of color at predominantly white institutions be honest with themselves about the amount of time and work they are putting in.

“The reason it’s important is because if you can’t name it, if you can’t say it, how do you expect the institution to compensate you for it?” she said.

Brown returned repeatedly to the issue of self-care and the importance of finding joy in life amid difficult work.

“We get so caught up in fighting for blackness, we forget to take delight in being Black,” she said.

In one of the lighter moments, Brown told McWhorter, president of the Wisconsin Black Student Union, that she should spend at least 10 minutes every day twerking in front of a mirror.

“You’re a whole person and you get to experience joy, not just the fight,” Brown told her.

As the keynote speaker for the Diversity Forum’s first day, Robin DiAngelo, who is white, spoke pointedly to white people about systemic racism. She is the author of the bestseller “White Fragility: Why It’s So Hard for White People to Talk About Racism.”

White people must be willing to devote years of sustained study, struggle and focus in order to understand systemic racism and their role in it, DiAngelo said. Without that commitment — and immense humility — their opinions will be uninformed and superficial, she said.

“You can get to graduate school in this country without ever discussing systemic racism,” said DiAngelo. “You can be certified to practice law and never have discussed systemic racism. You can be certified to teach in public schools and never have discussed systemic racism. And you can be seen as qualified to lead a major organization, one that even professes to value diversity in its mission statement, and have no ability to engage with any kind of nuance in these issues, and not even have been asked in your interview if you could engage. So . . . humility, humility, humility is so essential for us as white people around our opinions.”

About 3,300 people listened to DiAngelo’s talk live. She likened anti-racist work to trying to get into better physical shape. It takes multiple steps, and it doesn’t happen overnight.

“It’s a process — diet, exercise, sleep, stress-reduction and so on. And then you have to maintain it,” she said. “It’s very similar with anti-racist practice. It is an ongoing, lifelong process. It is deeply fulfilling and transformative. Once you start from the premise that, of course you’ve been socialized into this system, whoo, it’s freeing. You can stop the defending, the denying, the debating and just get to work trying to identify and change it.”

Recordings of most of the sessions from Diversity Forum 2020 will be posted in the coming days at go.wisc.edu/df20replay so that students, faculty and staff can continue to benefit from them.