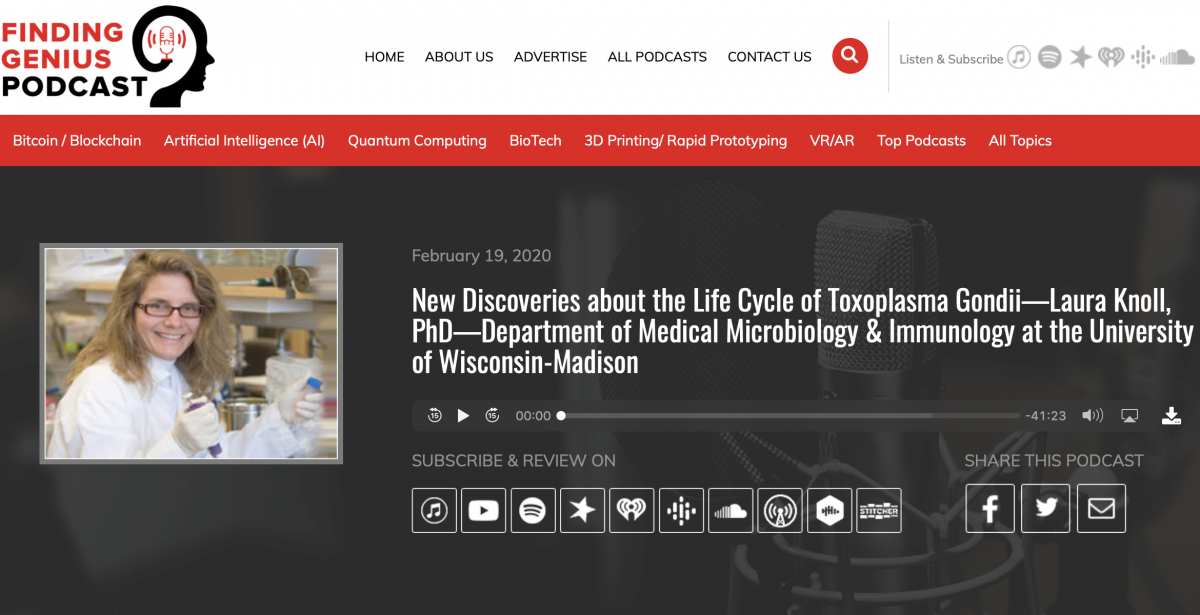 LISTEN TO THE PODCAST

“Professor Laura Knoll is a parasitologist who joins the podcast today to discuss some of her research on a type of parasite called toxoplasma gondii.

She explains the following:

Toxoplasma gondii is a parasite that can infect every warm-blooded animal on the planet, including humans. This parasite has the fascinating ability to enter muscle tissue and neurons in the brain to enact behavioral changes in the host. For example, a rodent infected with toxoplasma gondii will be attracted to the scent of predator urine rather than fearful of it, thereby exposing themselves to predation and allowing the parasite to continue thriving in other hosts—such as the cat.

Interestingly, the cat intestine is the only place where the sexual life cycle stage of toxoplasma gondii is found, which means the cat can shed infectious oocysts which can potentially put humans at risk of contracting toxoplasma gondii. However, Dr. Knoll explains that the vast majority of people who are chronically infected with this parasite have no idea, and suffer no negative consequences.

She explains how it can become a problem in people who have compromised immune systems, and the mechanism of host-parasite interaction that can occur in non-human animals and pregnant women who have never before been exposed to the parasite.

Until this past year, there was no way to research the sexual life cycle of toxoplasma gondii without using cats as research subjects, but thanks to Dr. Knoll and her team, the specific reason that the sexual stage only occurs in cats has been identified, which has enabled them to induce the sexual stage in mice.

With a mouse model, the opportunities for research have increased significantly and paved the way for the potential development of vaccines that could be administered to cats and livestock that carry and can pass on infectious oocytes.”